Start with your Why. The Golden Circle of entrepreneurship.

Why someone decides to quit his/her job to start his/her own company?

Let’s try to get over the classic clichés and listen to real life experiences, not filtered by the coolness and the hype surrounding the fact of being a tech entrepreneur. Few days ago I had the chance to listen 3 guys who did the jump: they quit their job and started their own company. 3 different typologies of entrepreneur, 3 different stages of entrepreneurship (names are fictional).

Different background, different experiences, different approaches to life…all of them have one thing in common: they decided to become entrepreneurs because they had strong internal reasons. No, the reason was not becoming outrageous rich like Scrooge McDuck. They wanted to create value. Something meaningful for them and for the others. 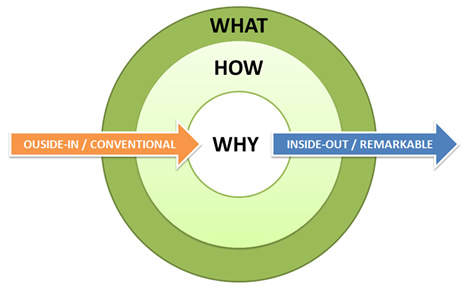 Simon Sinek found a pattern common to several innovators, from Steve Jobs to Martin Luther King. He codified the way innovators think, act and communicate in what he called “ the Golden Circle”. Why, How, What. All organizations know what they do. Few organizations know why they do what they do. Would you buy a PC promoted like “ We make great computers, beautifully designed, simply to use and user friendly, would you buy one? “ or a computer marketed like this: ” Everything we do we believe in changing the status quo, we believe in thinking differently. The way we challenge the status quo is by making our products beautifully designed, simply to use and user friendly which happen to make great computers. Would you buy one?”. The first example would be a company trying to sell you a product explaining what they do.They will list you the features, the technical facts, the rational reasons. Buy us, we are the best. Quite uninspiring. The second company, an Apple-like will start from the purpose, the cause, the beliefs. They will explain you why they do what they do and how it is mirrored in their products.( by the way a company who got it right is MiiR, check it out).

Entrepreneurs who found their Why are the ones who can really innovate. And change the world we live in. They have strong beliefs and emotional link to what they do. The Why – my ancient greek philosophy background reminds me what Socrates would had called daimon- will donate them the perseverance to go ahead, to beat obstacles and persuade as well others to believe in what they believe. They got the Golden Circle right. Inspiring leaders and organizations think, act and communicate from inside out, not from outside in.

” Did you regret quitting your job for entrepreneurship? “ all of them replied firmly No. I will do and redo everything again and again.